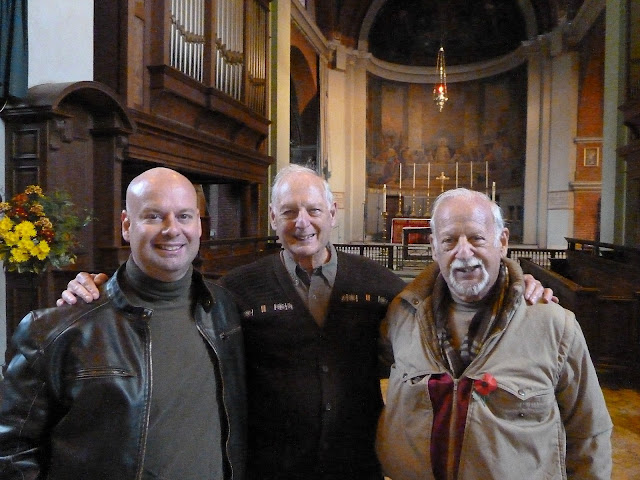 Visitors to the church this afternoon were Father Henry West (centre), his brother John (right) and John's son Martin.   Henry and John were the children of German refugees (originally called Wegner) who arrived in this country in 1939 and grew up in Templars Avenue. They attended the Suburb Infants' and Junior Schools, and then Clarks' College, Finchley and Finchley Catholic Grammar School respectively.  They were in London for the FCGS Old Boys' Dinner this evening.

Both were baptized and confirmed as teenagers at St Jude's and were servers here in the 1940s.  John was a boat-boy and remembers doing occasional duty as thurifer. Henry discovered his vocation to the priesthood here and continued as Master of Ceremonies at St Jude's while studying theology at King's College, London.  After his ordination in 1952 he served curacies in Wandsworth and Raynes Park before moving north to a parish in Hull. From 1971 he worked in the Council for Voluntary Service but continued to help out in his local parish church.  He now lives in Manchester. John had a career in banking in Nigeria and Switzerland before moving with his family to Florida where they now live.

Both reported that little appeared to have changed at St Jude's from their time here, although Henry was pleased to discover we were less troubled by pigeons in the roof than in the past. As a schoolboy he would borrow the Vicar's (Fr Maxwell Rennie) air rifle and take pot-shots at pigeons sitting on the tower (he was allowed to take them home for dinner).