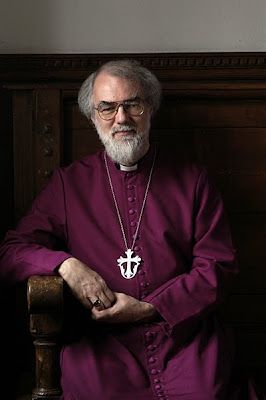 'This was to fulfill what the Lord had spoken through the prophet'. Phrases like this echo like a refrain through the nativity stories in the Gospels – and indeed the stories of Jesus' trial and death as well. The stories of Jesus' birth and death were, from the very first, stories about how God had kept his promise. The earliest Christians looked at the records and memories of what had happened in and around the life of Jesus and felt a sense of déjà vu: doesn't this remind you of...? Surely this is the same as...?

Bit by bit, they connected up the details of the stories with a rich pattern of events and images and ideas in Hebrew Scripture. Utterly unexpected pregnancies – like Abraham's wife Sarah, or Hannah, mother of the prophet Samuel. A birth in Bethlehem, where Jacob's wife died in bringing to birth the last of the ancestors of Israel, where an impoverished young widow from an enemy country was welcomed and made at home, to become the grandmother of the great hero King David. Shepherds in the fields of Bethlehem where young David had looked after his father's flock before being called to be shepherd of the whole kingdom. A star like the one foreseen by the ancient prophet Balaam as a sign of Israel's victory; foreigners bringing gifts of gold and incense, as the psalm describes foreign potentates bringing tribute to King Solomon . A murderous attack on the children of God's people by a Godless tyrant, a desperate flight and an exile in Egypt. The plain event at the centre of it all, the birth of a child in a jobbing handyman's family, is surrounded with so many echoes and allusions that it seems like the climax of an immense series of great happenings; like the final statement in a musical work of some theme that has been coming through again and again, more and more strongly, in the earlier bars. The last triumphant movement in God's symphony.

The story of Jesus is the story of a God who keeps promises. As St Paul wrote to the Corinthians, 'however many the promises God made, the Yes to them all is in him'. God shows himself to be the same God he always was. He brings hope out of hopelessness – out of the barrenness of unhappy childless women like Sarah and Hannah. He takes strangers and makes them at home; he brings his greatest gifts out of those moments when the barriers are down between insiders and outsiders. He draws people from the ends of the earth to wonder – not this time at the glory of Solomon but at the miracle of his presence among the humble and outcast. He identifies with those, especially children, who are the innocent and helpless victims of insane pride and fear. He walks into exile with those he loves and leads them home again.

This is the God he has shown himself to be; and he has promised that he will go on being the same God. 'I am who I am' he tells us; and 'I, the Lord, do not change', and 'I will not fail you or forsake you.' When we are faithless, he is faithful; when we seek to escape or even to betray, he does not change. In what is perhaps the most unforgettable image in the whole of Hebrew Scripture, God says that he has 'branded' or 'engraved' us on the palms of his hands (Is.49.16). He has determined that he will not be who he is without us. And in this moment of climax and fulfillment, in this last movement of the symphony, he shows in the most decisive way possible that he will not be without us; he binds his divine life to human nature. Never again can he be spoken of except in connection with this human life that begins in the stable at Bethlehem.

From one point of view, then, a story of triumphant persistence. Nothing has shaken God's decision to be with those he has loved and called, and now nothing ever will. Nothing, as St Paul again says, can separate us from what is laid bare in the life and death and resurrection of Jesus. And yet from another point of view, it is a story of unimaginable cost and apparent tragedy. For if God has chosen to be with us in this way, he is associated with our weaknesses, humiliated by our betrayals, exposed and vulnerable to our casual decisions to take our custom elsewhere. In the book of the prophet Hosea, we see this depicted in harrowing terms as the marriage of a faithful man to an unfaithful woman, a marriage which the man refuses to accept is over. I suspect that a good many of us have seen cases of a faithful woman sticking obstinately to an unfaithful man. In human terms, such faithfulness is likely to look naïve, foolish or just pointless self-punishing. But God, it seems, knows that whatever limitation and humiliation our human freedom lays on him, we cannot live without him; and he accepts everything for the sake of our well-being.

Christmas is about the unshakeable solidarity of God's love with us, not only in our suffering but in our rebellion and betrayal as well. One mediaeval Greek theologian, deliberately out to shock, described as God's 'manic passion', God's 'obsession'; manike eros. And so it is a time to do some stocktaking about our own solidarity and fidelity, our own promise-keeping.

There are at least three things we might ponder in that respect, seeking to understand ourselves better in the light of the Christmas story. The first is our solidarity with one another, in our society and our world, our solidarity with and loyalty to our fellow-citizens and fellow-human beings. Faced with the hardship that quite clearly lies ahead for so many in the wake of financial crisis and public spending cuts, how far are we able to sustain a living sense of loyalty to each other, a real willingness to bear the load together? How eager are we to find some spot where we feel safe from the pressures that are crippling and terrifying others? As has more than once been said, we can and will as a society bear hardship if we are confident that it is being fairly shared; and we shall have that confidence only if there are signs that everyone is committed to their neighbour, that no-one is just forgotten, that no interest group or pressure group is able to opt out. That confidence isn't in huge supply at the moment, given the massive crises of trust that have shaken us all in the last couple of years and the lasting sense that the most prosperous have yet to shoulder their load. If we are ready, if we are allready, to meet the challenge represented by the language of the 'big society', we may yet restore some mutual trust. It's no use being cynical about this; whatever we call the enterprise, the challenge is the same – creating confidence by sharing the burden of constructive work together.

The second is something quite different, but no less challenging. Next year, we shall be joining in the celebration of what we hope will be a profoundly joyful event in the royal wedding. It is certainly cause for celebration that any couple, let alone this particular couple, should want to embark on the adventure of Christian marriage, because any and every Christian marriage is a sign of hope, since it is a sign and sacrament of God's own committed love. And it would be good to think that I this coming year, we, as a society, might want to think through, carefully and imaginatively, why lifelong faithfulness and the mutual surrender of selfishness are such great gifts. If we approach this in the light of what we have just been reflecting on in terms of the Christmas story of a promise-keeping God, we shall have no illusions about how easy it is to sustain such long-term fidelity and solidarity. There will be times when we may feel stupid or helpless; when we don't feel we have the energy or resource to forgive and rebuild after a crisis or a quarrel; when we don't want our freedom limited by the commitments we've made to someone else. Yet many of us will know marriages where something extraordinary has happened because of the persistence of one of the parties, or where faithfulness has survived the tests of severe illness or disability or trauma. I admit, find myself deeply moved at times when I speak with the families of servicemen and women, where this sense of solidarity is often so deeply marked, so generous and costly. As the prince and his fiancée get ready for their new step into solidarity together, they will have plenty of inspiration around, more than you might sometimes guess from the chatter of our culture. And we can all share the recognition that, without the inspiration of this kind of commitment in marriage, our humanity would be a lot duller and more shallow – and, for the believer, a lot less transparent to the nature of the God who keeps his covenant.

And lastly, a point that we rightly return to on every great Christian festival, there is our solidarity with those of our brothers and sisters elsewhere in the world who are suffering for their Christian faith or their witness to justice or both. Yet again, I remind you of our Zimbabwean friends, still suffering harassment, beatings and arrests, legal pressures and lockouts from their churches; of the dwindling Christian population in Iraq, facing more and more extreme violence from fanatics – and it is a great grace that both Christians and Muslims in this country have joined in expressing their solidarity with this beleaguered minority. Our prayers continue for Asia Bibi in Pakistan and others from minority groups who suffer from the abuse of the law by certain groups there. We may feel powerless to help; yet we should also know that people in such circumstances are strengthened simply by knowing they have not been forgotten. And if we find we have time to spare for joining in letter-writing campaigns for all prisoners of conscience, Amnesty International and Christian Solidarity worldwide will have plenty of opportunities for us to make use of.

Economic justice and Christian marriage and solidarity with the persecuted – very diverse causes, you might think. But in each case, the key point is about keeping faith, sharing risks, recognising that our lives belong together. And all this is rooted for us in that event in which all God's purposes, all God's actions, what we might call all God's 'habits of behaviour' with us come into the clearest focus. 'This was to fulfill what the Lord had spoken'; this was the 'Yes' to all the promises. And what God showed himself to be in Hebrew Scripture, what he showed himself to be in the life and death of the Lord Jesus, this is what he ahs promised to be today and tomorrow and for ever. He cannot betray his own nature, and so he cannot betray us. And by the gift of the Spirit, we are given strength, in all these contexts we have considered and many more, to let his faithful love flow through us, for the fulfillment of more and more human lives according to his eternal purpose and unshakeable love.