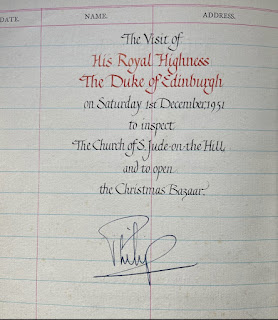 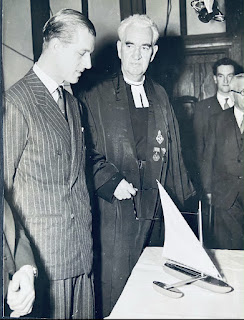 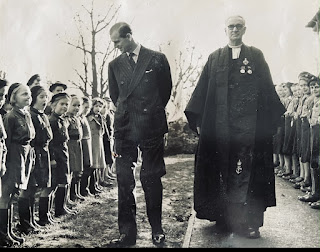 On Saturday 1st December 1951 the Duke of Edinburgh visited Hampstead Garden Suburb to ‘inspect’ St Jude’s Church and open the Christmas Bazaar being held in the Free Church Hall in Northway.  A souvenir edition of the parish magazine reported the visit.

At 10.50am a large green saloon car drew up in front of the vicarage and the tall, slim driver was almost at the door before he was recognised and cheering broke out. Children waved Union Jacks excitedly. The day of the sixteenth royal visit to St Jude’s had dawned.

A few minutes earlier the Duke had stopped in Meadway to ask a constable the way to the vicarage. “St Jude’s is up there,” said the officer, “but you cannot go that way. We are waiting for the Duke.” Then he recognised the royal visitor and directed him to Central Square. The Duke drove on laughing.

After spending a short time with the vicar, the Reverend Maxwell Rennie, and his family in the vicarage, the Duke walked across to the church in the brilliant sunshine where he was welcomed by the churchwardens and introduced to Walter Starmer, the artist of the extensive mural scheme that fills the church. That work had largely been completed by the late 1920s, but Starmer had ‘returned’ (he was actually a regular worshipper at St Jude’s - though living in Edgware) to paint a memorial to the vicar’s son, Michael Rennie, who had lost his life rescuing children from the torpedoed evacuation ship City of Benares in 1940.

The Duke, then Prince Philippos of Greece, had shared a study with Michael at school at Gordonstoun.

In the Free Church Hall over 500 people greeted the Duke as he was piped onto the platform by the St Jude’s Sea Rangers. The vicar said it was an immense delight to welcome “the Empire’s greatest ambassador” especially so soon after his strenuous tour of Canada and America with Princess Elizabeth. “Many of us wondered if a document would arrive from Clarence House saying ‘It is all very well, but there is a limit’.”

Two of the St Jude’s children presented the Duke with presents for his own children: a model of an eastern catamaran (made by the vicar) for Prince Charles and a doll for Princess Anne.

The Duke said: “I am very bad at opening bazaars, and I always find there are many people, especially Members of Parliament, who always say the right thing at the right time.  However, I am taking a chance this time because, when I received this invitation from your vicar, I felt that opening the bazaar was the least I could do in memory of a very great friend of mine, Michael Rennie, who went to school with me and lost his life during the war.”

Dr Kurt Hahn, founder and headmaster of Gordonstoun School, had travelled from Scotland to be present at the bazaar, but a sudden emergency at his school necessitated his return. He sent, however, a generous donation to the bazaar and wrote to say that he intended to dedicate a study in the new wing to the memory of Michael Rennie.

After admiring the goods for sale and having a word with all the stallholders, the Duke passed through a guard of honour to his car and received a tumultuous farewell from the crowd outside.

The 80th anniversary (postponed from last year) of the death of Michael Rennie and the loss of the City of Benares will be commemorated (close to what would have been the Duke’s 100 birthday) at Proms at St Jude’s.