75th Anniversary of the Beginning of the Second World War


On 2 September 1939 the United Kingdom issued an ultimatum to Germany requiring an immediate withdrawal of military forces from Poland.  The ultimatum expired the following day at 11:00am without response, and so the Prime Minister, Neville Chamberlain, announced consequently this nation is at war with Germany.

This year the Bishop of London preached in the Berliner Dom (Berlin Cathedral) on Sunday 31 August to mark the 75th anniversary of the start of the Second World War.

As he recalled the two great wars of the twentieth century he said:

We cannot change the past but we do have to accept responsibility for how we remember it – the future depends on how we remember the past…. We should recognise how new Europe is in its present form  . . .   Thomas Masaryk described the Europe of these years as 'a laboratory atop a vast graveyard.'  Our present situation is not the result of any historical inevitabilities but just one of the possible outcomes of the protracted 20th century European civil war.

The Diocese of London formed a partnership with the Diocese of Berlin-Brandenburg in 1999 and the Bishop spoke of the importance of developing that partnership in the context of the new challenges facing Europe today.

The Bishop of London’s full sermon can be read here.

The beginning of the War missed both the August and September issues of the St Jude's Gazette.  The October 1939 edition opened starkly with a list of WARTIME ARRANGEMENTS.

The boiler house has been converted into an extremely strong and effective shelter, and has been commended as one of the best so far inspected in the district.  It has been fitted up as a chapel in the case of need.  The two west lobbies have also been fortified and are open day and night.  These lobbies are not effective for anti-gas however.  If the warning should sound before Mass the Celebrant will say Mass in the basement chapel at the proper time. If the warning should sound during Mass the Celebrant will complete the Mass, giving Communion to such as remain. At High Mass, in such a case, any music which prolongs the service will be omitted.


People living more than 10 minutes away from the church should preferably make use of our shelters when the service is over or when they feel obliged to leave the body of the church,  Those living close to the church should return home if they have adequate shelter there if the church shelters are full.  The Vicarage will always be open for the purposes of shelter. 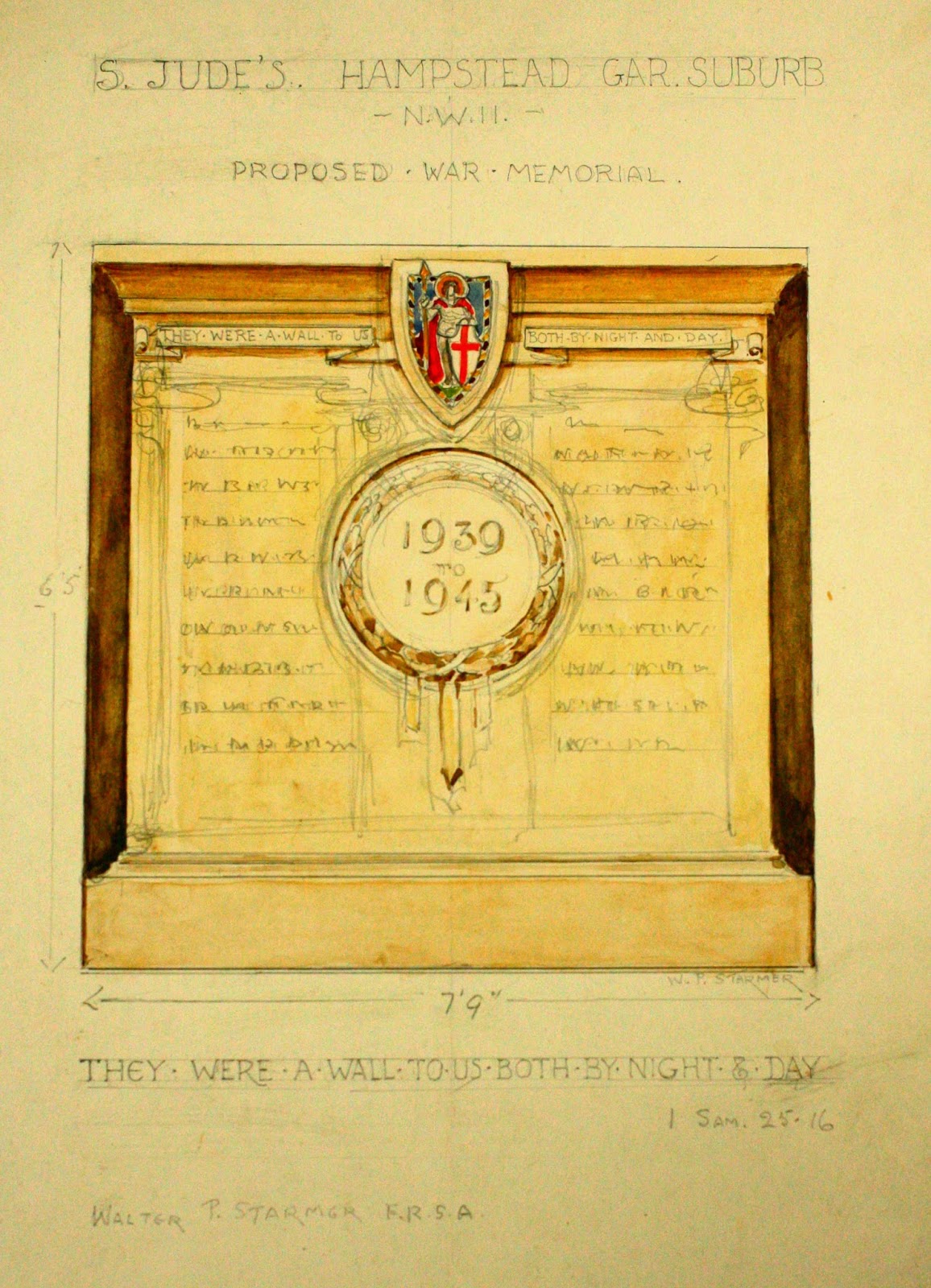 St Jude's has no Second World War Memorial, although a drawing exists of a proposal for one by Walter Starmer who had painted the murals in the church.  The Church Council thought the money would be better spent on a Memorial Hall in the newer part of the Suburb beyond the Market Place. The hall was never built.