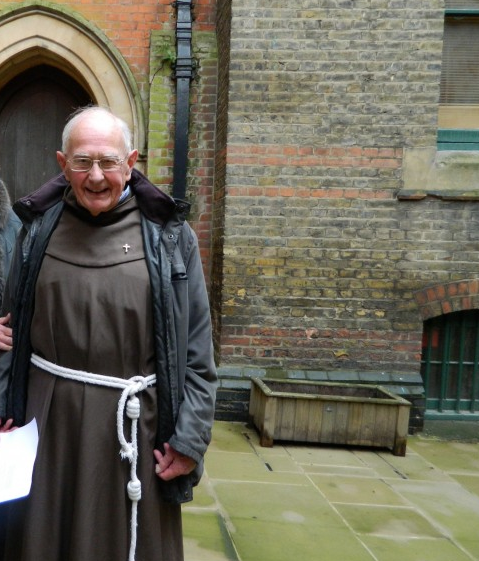 Please pray for the repose of the soul of Br Martin SSF who died on 19 May.

Brother Martin was a life-long friend the late David Hill, Reader and Sacristan at St Jude’s.  He was a regular visitor to St Jude’s and leader of our Quiet Days at the convent in Edgware.

Born in 1925, in Croydon John Morrell Coombe  attended St Peter’s Croydon before moving to St Michael and All Angels, a centre of Anglo-Catholicism.

He was noviced in the Society of St Francis in 1949 as Brother Martin and professed in 1951. Ordained to the Priesthood in 1958 he served as Curate-in-Charge for the Hilfield and Hermitage Parishes (near Hilfield Friary) and then became a School Chaplain for five years serving first as the Assistant Chaplain at Ellesmere College (1966-1969) and then Chaplain of Ramby House School (1969-1971).

In 1971 he moved to Cambridge to become the Vicar of St Benet’s (the Franciscan Church in Cambridge) where he served until 1985. The present Vicar of St Jude's was a member of the St Benet’s congregation as an undergraduate during Martin’s incumbency.

In ‘retirement’ Br Martin lived in London, initially in Stepney, but then in Plaistow where he lived in St Mary’s Vicarage - ‘the happiest house in the Province’ according to Br Martin. He continued to exercise his Priesthood until shortly before his death serving mainly in St Peter’s, London Docks (where he celebrated his 60th anniversary of Profession) and St Andrew’s Holborn. In both places his ministry was highly valued and he was much loved.

His funeral took place at St Peter’s on Friday 30th May.


And let light perpetual shine upon him.