The Way of the Cross 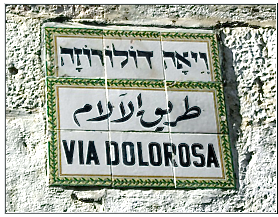 The Way of the Cross has formed part of Christian devotion at Passiontide for many centuries because they enable us to engage actively with the path of suffering walked by Jesus. They originated when early Christians visited Jerusalem and wanted to follow literally in the footsteps of Jesus, tracing the path from Pilate’s house to Calvary along the via Dolorosa - the street of suffering.

They would pause for prayer and devotion at various points or stations. Eventually those pilgrims brought the practice back to their home countries and ever since then Christians have used this form of devotion.

In the late fourteenth century the Franciscans were given the responsibility for the holy places of Jerusalem and they erected pictures or tableaux to aid the devotion of the visitors.

The Stations in St Jude's are the work of W. P. Starmer.

During the weekdays of Lent - beginning tomorrow and continuing until the Friday before Palm Sunday - we will be publishing short meditations based on the Stations in the St Jude's.