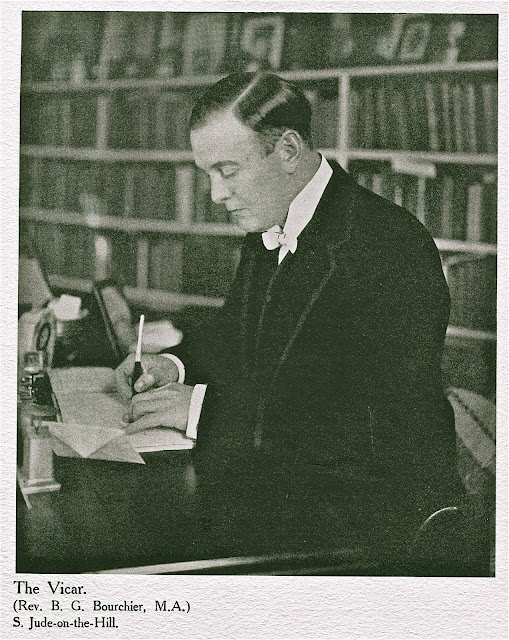 Basil Bourchier was born at Steeple Morden, Cambridgeshire, on 13 February 1881, the second son of the vicar of that parish, the Reverend Walter Bourchier, Fellow of New College, Oxford. He was educated at Bloxham School (St Mary's Lodge Preparatory), Merchant Taylors' School (1892-99), and Queens' College, Cambridge (BA 1903, MA 1906). He was ordained deacon in 1904, priest in 1905, and served in in the parish of Hebden Bridge until 1908, followed by a year at St Anne's Soho. In 1909 he was appointed London Diocesan Home Missioner of St Jude-on-the-Hill, becoming the first vicar when the church was consecrated and the new parish created in 1911. 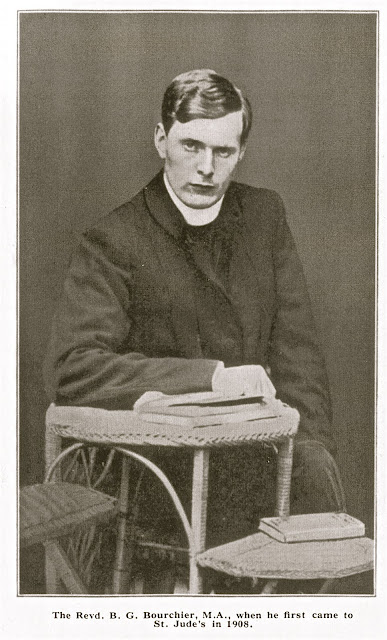 When the First World War broke out he went in August 1914 as chaplain to a Red Cross unit in Belgium. The unit fell into the hands of the Germans who persisted in regarding Bourchier asa spy. He was tried by court-martialand sentenced to death, but was reprieved and held as a prisoner of war until 1916. He later wrote: "Sentence to be shot at dawn was passed on me by a German commandant in charge of the district where I and my companions were taken prisoner; it was the greatest thrill of my life".
From the prison camp he returned to the Suburb and made St Jude's one of the most famous churches in the land.
The Daily Mail (17 March 1934), reporting his death, said:
"His voice was always raised on behalf of the underdog and the oppressed. He spoke vigorously for social reform and from his pulpit advocated the lash for those men who attacked women.
Nothing was without the orbit of his interests or his thoughts - what he thought he said. He inveighed against women's fashions, saying that the greatest offenders were women and often professedly Christian women who came to church in hats and garments which might have meant suffering to birds and beasts.
He was a great lover of the theatre, and perhaps he developed a little of the histrionic art in the pulpit, but he used it only that his words might carry greater weight, and that the message he had to give might fly the faster and receive the attention it deserved".
An anonymous correspondent added:
"I like to remember [him] when he was at the height of his fame when his appearance at any function was sufficient to invest it with the importance of a great occasion. There would be a stir at the door when his burly figure entered, and everyone would turn respectfully aside as he passed along, usually overcoatless and muffled in a thick woolen scarf. No need to ask for silence when he entered a platform. His deep, resonant voice would penetrate to the end of any building, and his every movement be followed by the admiring onlookers in the seats below".
Kathleen M. Slack in Henrietta's Dream: A Chronicle of the Hampstead Garden Suburb 1905 - 1982 recalls:
"A retired parishioner described Mr Bourchier as 'a very handsome man, more like an actor than a clergyman'. Another one remembered him as 'a fascinating man'; a third as 'a real sport' and a fourth as 'very popular with the ladies and with royalty'."
"His powerful sermons, not all of which were to the liking of all the members of his congregations, were always printed in full in the church magazine and showed him to be eager for the punishment of offenders; inveighing against vivisection, vegetarianism. spiritualism and performing animals. He was a strong supporter of Sunday games, horse-racing and professional boxing."
Evelyn Waugh had a rather different assessment of Bourchier, the 'preposterous parson', but there can be no doubt as to his success at St Jude's. For all Bourchier's "extravagant display", Waugh acknowledged, "I had some glimpse of higher mysteries'.
It has to be said Bourchier's ministry was to an extent an essentially personal and 'charismatic' one. When he left St Jude's to return to St Anne's, Soho as Rector in 1930 he took a large share of the (mainly non-local) congregation with him, including the organist, much of the choir, the 'artist in residence', and a number of church officials. The frequent royal visits came to an abrupt end, newspaper reporters were no longer in attendance, the church could no longer count on wealthy and aristocratic benefactors to supply its needs. St Jude's settled down to being an ordinary suburban parish church. The new vicar was soon writing about the great congregations and celebrations of the past as if they belonged to a distant age rather than a few months previously.
Bourchier's time in Soho was to be short. The story of his downfall is told by David Roe in Standing in the Wings (1987 ). Agreeing to retire "on health grounds" he preached his farewell sermon at St Anne's on 3 December 1933 "in an atmosphere charged with drama".
The Daily Mail reported:
"Helped painfully and slowly into the pulpit, with trembling hands and ashen countenance, he said 'I am passing into the shadow of death. It is my doctor's wish that I shall be brief. I cannot stay long, but I have no fear. God may take me today or tomorrow. Let them be no sadness of farewell as I embark.' Women members of the great congregation that filled the church sobbed with emotion'.
"That got 'em. Didn't it", he said as he returned to the Rectory and disappeared into his study, according to Roe, "leaving us all speechless and horrified". The next day he set off on one of his many sea trips to South Africa. But three months later on 16 March 1933, he died, aged 53,in a nursing home in Cambridge nursed by his 80-odd year old mother. Newspapers across the Empire carried the story of his last sermon again, interpreting it now as a prophecy of his death. 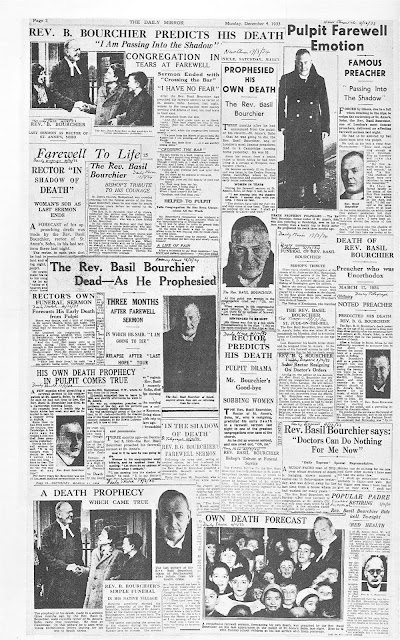 In his will he left £15,150 (about £850,000 today) with gifts of a statue and furniture to the King and Queen, the contents of his country house Wimpole Lodge, Royston to be sold to endow a new church in the Diocese of Lincoln, and £1000 to erect a chantry chapel dedicated to the Blessed Virgin Mary in the garden. He also left £50 for a doctor to make sure he was truly dead before the burial. 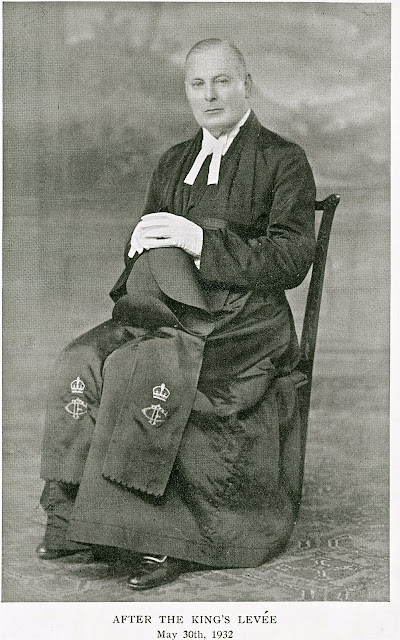 In 1937 Little Dean Street in Soho was renamed Bourchier Street in his memory. Jude's is full of memorials to him: the west end of the church was completed in his memory, his initials are to be found on the brass altar rails. After his death his leaving portrait, by the royal artist Maurice Codner, was returned to the church and now hangs in the vicarage. Another portrait, formerly in the south west porch, is presently in store, a third is on permanent loan to St Anne's, Soho. As Wren said of St Paul's, if you want to see Bourchier's legacy to St Jude's, "look around you". 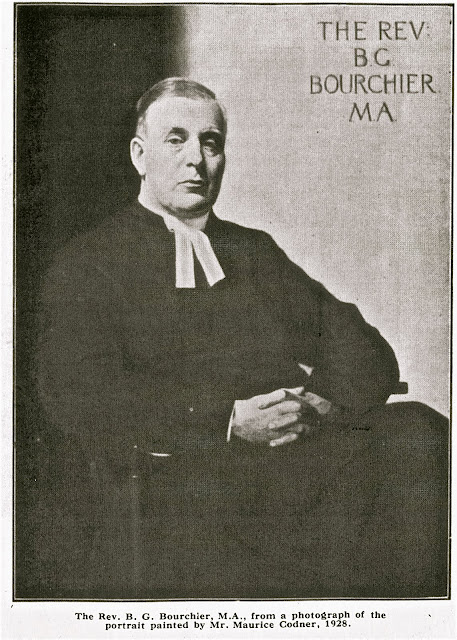 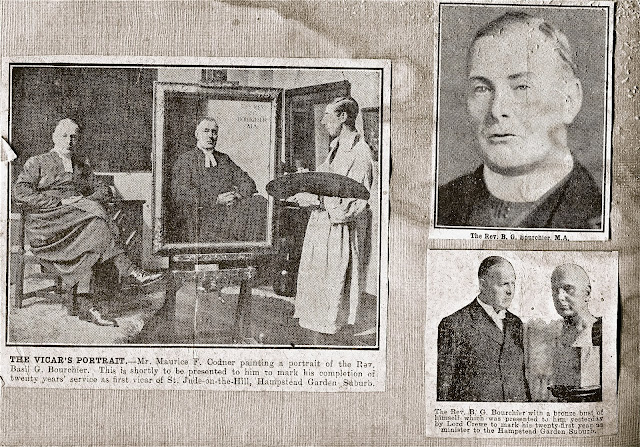 A page from an album kept by an admirer - one of several in the church archives. 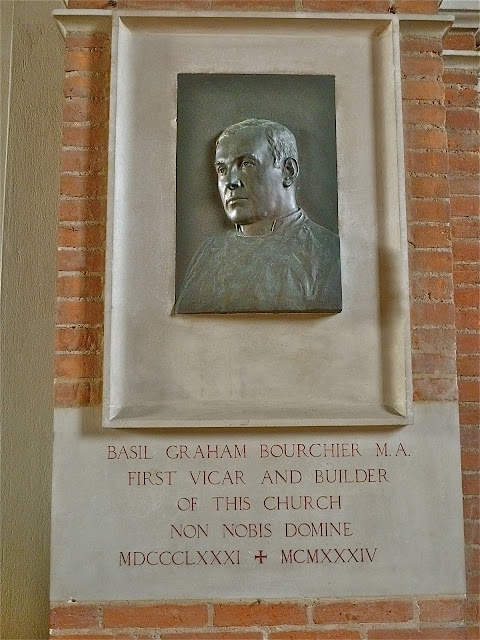