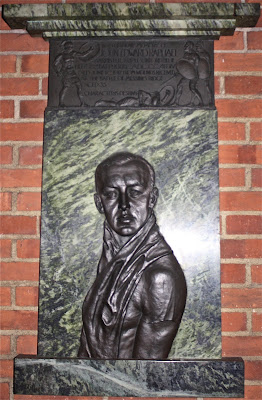 Lieutenant John Edward Raphael (born 1882) was the only child of Albert and Harriette Raphael, of 5 Wild Hatch. He was educated at Merchant Taylors’ School and St John's College, Oxford, became a member of Lincoln's Inn and was called to the bar in 1908. He had some ideas of a political career; but his debut as Liberal candidate for Croydon in 1909 was not successful.

Interestingly Mrs Raphael was not a worshipper at St Jude’s, and only an occasional visitor to the Free Church. In a memorial note in the St Jude’s Parish Paper (January 1931) she is described as “not intimately associated with the teaching of either [church], but she was an earnest and eager enquirer into the Unseen, and always welcomed fresh angles of vision”. In fact she was a Theosophist and a contributor to the fund for the building of the new Theosophical Society headquarters in Tavistock Square which was designed by Lutyens. Lutyens’s wife Emily was a Theosophist and is said to have spent much of her husband’s income on promoting the movement.

Mrs Raphael bequeathed 5 Wild Hatch to St Jude's with the condition that it should not be not sold but used as a clergy house or rented to produce income for the work of the parish. The St Jude's Gazette for July 1938 records the sale of the house for £1850 (today about £93,000). "This sum will be invested for the Clergy Income Fund, and will thus be of great help to us in perpetuity. The house was always a considerable expense to us and to any priest who lived there, so we feel that its sale has fulfilled the purpose of its gift to the Church as a benefaction on behalf of the clergy." 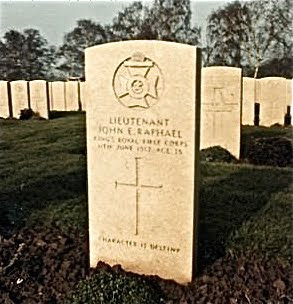 The motto on both monuments is from Harriette Raphael's forward to her son's book Modern Rugby Football (1919): "If character be Destiny then his is assured".
We are grateful to Paul Wapshott of Derwen College, Oswestry for material in this post.