Evelyn Waugh and the 'preposterous parson'


The novelist Evelyn Waugh, author of Brideshead Revisited and the Sword of Honour trilogy, was confirmed at St Jude's on 29 June 1916. His family lived at 'Underhill' on North End Road, and his father was for many years a sidesman at St Jude's. 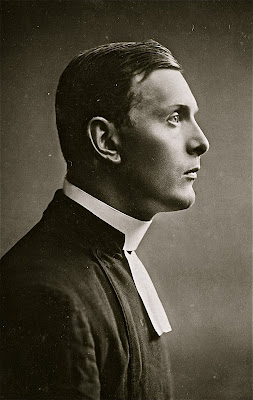 "St Jude's . . . was then in the charge of the Revd Basil Bourchier. Bourchier, a cousin of the actor-manager, Arthur Bourchier, and satirised as the odious Cyril Boom Bagshaw in A.S.M. Hutchinson's best seller, If Winter Comes, was an actor manque, one of those flamboyant, theatrical priests who in every age are to be found showily performing from the pulpit. Arthur regarded the man as a rollicking joke, enjoying the novelty of each weeks antics. Bourchier put a lot of thought into his dramatic effects: while his flock were taking Communion, a large red, electric cross was switched on over the altar; and the lesson was often acted out with impressive literalness.'

'[Bourchier] was a man without pretension to doctrinal orthodoxy; a large, florid, lisping man, who was often to be seen in the stalls of London theatres in lay evening dress. No one could have been more alien to the ideals of Dame Henrietta Barnett and of the general run of the inhabitants of his parish. He was a man of wider claims. His name was constantly in the popular newspapers, giving his wayward opinions on any subject about which he was consulted. He professed an extravagant patriotism . . . He was anathema to the genuine Anglo-Catholics of Graham Street, Margaret Street and St Augustine's, Kilburn. His congregation was not exclusively - nor indeed primarily - local. Personal devotees flocked to him from all parts of London. His sermons were dramatic, topical, irrational and quite without theological content. . . .

Mr Bourchier was a totally preposterous parson. When he felt festal, whatever the season or occasion marked on the calendar, he dressed up, he paraded about, lights and incense were carried before him. When the mood took him he improvised his own peculiar ceremonies. Once he presented himself on the chancel steps, vested in cope and bearing from his own breakfast table a large silver salt-cellar. 'My people ,' he announced, 'you are the salt of the earth', and scattered a spoonful on the carpet before us. . . .

Despite all Mr Bourchier's extravagant display I had some glimpse of higher mysteries'. 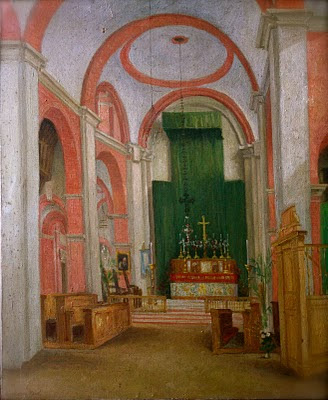 The red electric cross can be see in this early painting of the sanctuary by the Belgian artist Karel Verschaeren. It was a replica of one to be found in Milan Cathedral, and for 26 years hung in St Olave's Church, Hanbury Street before the stall of Bourchier's father who was Rector there. It came to St Jude's when that church was demolished in 1913 and remained here until 1932 when it was returned to Bourchier, now at St Anne's , Soho. It is, of course, usual to have an ever-burning red light before a church's principal altar.

Waugh became a Roman Catholic in 1930, and his memories of Bourchier were recorded many years later. The 'wayward opinions' included a concern for animal welfare which would now be seen as prescient. He was actually succeeded by a 'genuine Anglo-Catholic' from Margaret Street, the Rev'd Edward Arundell - although it is clear that the latter was surprised when some from the congregation questioned his 'orthodox' explanations of liturgical practices they had accepted for years .