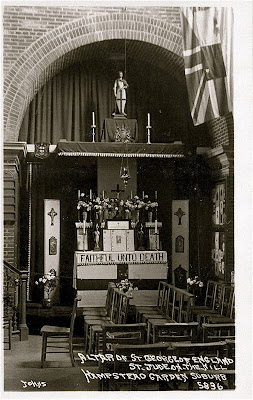 The St George's altar in the south east aisle.
The Parish Paper of January 2nd 1925 (No 674) briefly mentions a "new Chapel of St George". That of April 30th 1926 (No 743) records "the Festival of St George of England was fittingly observed by a High Service celebrated in the dear little chapel at the West end".
Barbara Britton in her Brief Guide to St Jude's (October 1979) records that the St George's altar stood originally at the 'south east end' of the church until the building of the apse in 1923. This probably means at what is now the entrance to the St John Chapel (opened in 1923) with the east end of the south aisle forming a 'chapel'. The choir vestry at this time was at the west end.
The 'north transept' was occupied from 1923 by the organ (brought from St Jude's, Whitechapel) in a gallery specially designed by Lutyens. The position proved unsatisfactory and it changed places with the St George's altar in 1931. 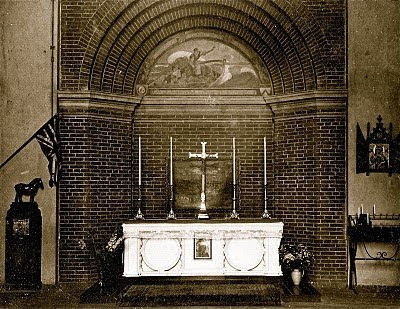 This old photograph shows the present (but clearly a different) St George's altar on the north transept wall. The original horse memorial stands to the left. There is no sign of the statue of St George. The presence of the painting commemorating Michael Rennie in the City of Benares lifeboat helps date the photograph to after 1942.
Notes: City of Benares, Horse Memorial, Michael Rennie, north transept, organ, St George's Chapel, Walter Starmer
Newer Post Older Post Home