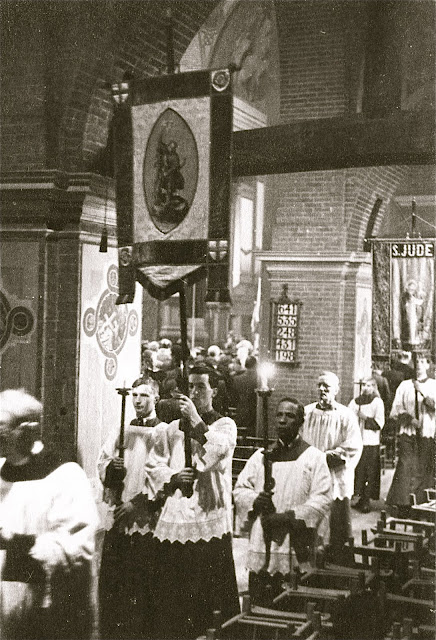 Thanks to Peter Simpson of Inverness for some detective work on our post High Mass in 1948.

"The hymn board is the give away. I don't know which hymn book you use now, but you clearly used the English Hymnal in 1948. This must be All Saints' Day and the High Mass started with a festal procession round the church - your first photo showing this procession as it made its way down the south aisle. In those days (shortly after the end of World War II) it was quite usual for the uniformed organisations to join in the procession with their flags behind the altar servers at the head.

The one hymn which puzzled me was No. 248! This is assigned to St Simon and St Jude (28 October). It could not be this day because the vestments are clearly white, not red. However, 1 November would have been in the Octave of what I assume is your Patronal Festival, and when one looks at the words of Hymn 248 they are in fact quite suitable for All Saints' Day.

The vast display of flowers on the altar rather supports my claim that this was in the Octave of your Patronal Festival. Furthermore, All Saints' Day fell on a Sunday in 1948 - so the servers and Girl Guides were not playing truant from school!

All good wishes for your centenary celebrations."

[It now seems these photos were actually taken on the Sunday within the Octave of St Jude in 1947 rather than 1948. They were the work of Albert Lomax and were part of a set of ten sold by the church as a record of the ceremonial of High Mass. St Jude's Gazette December1947] 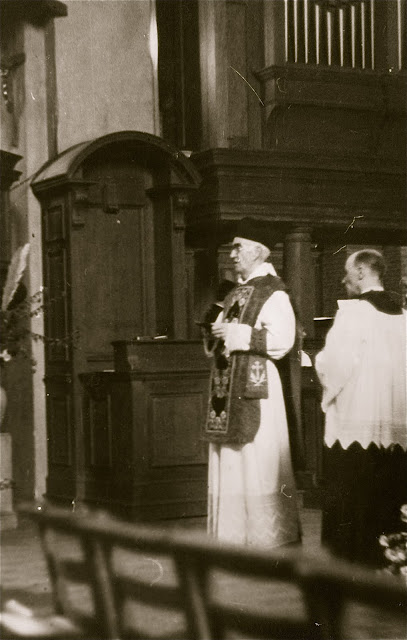