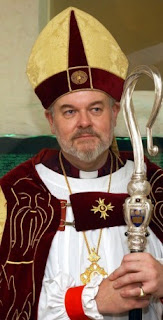 Listen to the Bishop's Message here

The Christmas story begins with an act of Big Government. Caesar Augustus sends out a decree that, "all the world should be taxed."

It is a reminder that the debate about the proper relationship between the state and society is nothing new.

Clearly things are different at the beginning of the 21st century and talk of the Big Society is an attempt to reassess the relationship between the state, the individual citizen and the "little platoons" whose importance in developing the possibility of a creative and democratic society is once more being appreciated.

As a result of Caesar's decree, Mary and Joseph were dislodged from their own homes in Nazareth and sent to their census point in Bethlehem. Despite challenges which could have destroyed their unity, they remained faithful to each other. Their child was, however, born in the most vulnerable circumstances and very soon the family became refugees, victims of Herod's persecution.

Christmas is a time for celebrating the 'small societies' which are created by generous self-giving. We should go out of our way to show our appreciation for all those who provide a strong and loving environment in which the young can flourish in their early years.

However, our gratitude should not stop there. We should celebrate the volunteers, the mainstay of the myriad of charities which are one of the glories of Britain. It is all those who sustain the small societies – the families, the charities – who provide the oxygen on which the health of the Big Society depends.

The Deputy CEO of the Paddington Development Trust was recently chairing a meeting of voluntary organisations in the area. She asked in the light of the forthcoming cuts, how many of the fifty organisations represented in the room were confident of delivering the same level of service to the local community in a year's time. Only three hands went up – all Church of England vicars.

It is an illustration of the vital role that churches and other faith communities play among others in building the Big Society.

The Diocese of London is indeed rich with examples of many people doing just this, with 600 community projects enabling local people to support the young and the vulnerable across 450 parishes. Examples span from a church in Holborn that has trained 12 "listeners" to offer professional support services to City workers feeling under pressure in their jobs, to a church in Tottenham that is providing an early intervention counselling service to 33 East Haringey schools. The Church in London has for some time embraced the challenge of providing the types of support networks that are proving to be the foundations of today's Big Society.

The best contribution of Government in these circumstances is to reduce the regulatory burden on volunteers and allow them the freedom to carry out their vital work.

No country is rich enough to supply the absence of the little societies which bring meaning and comfort in the lives of individuals and which oxygenate our civic life by making us apt for the compromises and cooperation of life together.

When therapeutic social structures decay, no ambulance service, however well-funded, will be sufficient to deal with the consequences.

Part of the experience of the past is that there is a cost to volunteering and that charities, churches, and other groups cannot simply expand their volunteering without also expanding the infrastructure to provide support, advice, training and crucially management of volunteers.

State support is crucial in building this infrastructure and capacity. As Mohammad Yunus (the great pioneer of micro credit) has argued in Building Social Enterprise the key is in uniting framework with goodwill and passion. Goodwill and passion by themselves are not enough but they are essential.

It was the childhood of the Saviour in the home of Mary and Joseph which laid the foundation for his latest work. Jesus Christ is the human face of a God who so loved the world that he was generous and gave of his own self. Living in the way he taught, we can see that it is in reaching beyond ourselves in generous service that we reveal our deepest and truest nature. The more ego is diminished, the richer we become in soul.

The State must from time to time intervene and use lawful coercion to hold things together. Society by contrast is founded on the mutual respect and willing cooperation of good neighbours. They will be the true engineers of the Big Society.