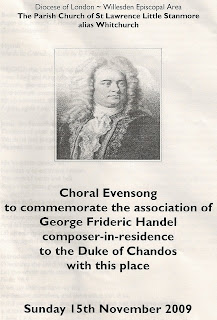 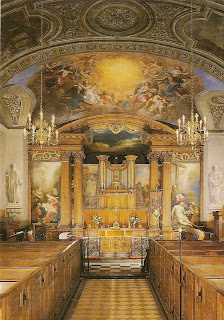 On Sunday 15 November the St Jude's choir under the direction of Nic Chalmers joined with the choir of St Lawrence's Stanmore at a Choral Evensong to commemorate the 250th anniversary of the death of Handel. Handel was resident composer to the Duke of Chandos who had purchased the nearby Cannons estate in 1715 and whose family mausoleum adjoins the church. Our connection being through our organ scholar from Henrietta Barnett School, Anna Steppler, whose mother directs the choir at St Lawrence's.
Like St Jude's, St Lawrence's has a painted interior - although a rather grander one. The Duke employed fashionable artists of his day to decorate his great mansion of Cannons, then under construction (and since demolished). Those same artists - Antonio Bellucci, Louis Laguerre, Francesco Sleter - created the dramatic interior of the church. Walls and ceiling are covered with paintings of biblical scenes, some brilliantly coloured, others in sepia and grisaille, with trompe l'oeil used to considerable effect. The paintings were recently cleaned and restored. The splendid woodwork includes an organ case carved by Grinling Gibbons.
The Vicar of St Jude's particularly enjoyed being able to observe Divine Service in an eighteenth-century manner from the Chandos Pew - actually a kind of royal box in the gallery at the west end of the church (flanked by smaller boxes for bodyguards and flunkies).
Notes: choir, Handel, liturgy, music, organ, Stanmore, worship
Newer Post Older Post Home