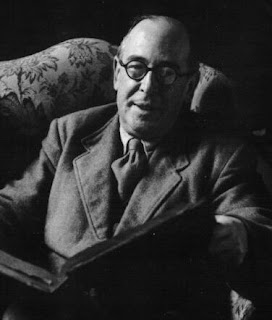 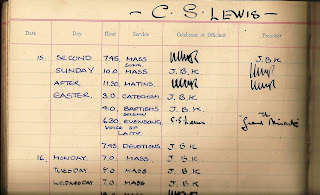 C.S Lewis and his signature in the St Jude's Register for April 1945
An enquiry today from Professor Joel Heck of Concordia University in Texas about wartime talks given in St Jude's by C. S. Lewis, the author of the Narnia books and Christian classics like The Screwtape Letters.

Lewis's first visit was announced in the St Jude's Gazette September 1942 (for 27 September) as part of a series called 'The Voice of the Laity'. It is made clear there that these talks followed Evensong, so it is strictly speaking inaccurate to describe them (as some have done) as 'sermons' or to say the speakers 'preached'. Lay people were not (and, unless licensed, are not) permitted to preach in the Church of England. The talk was printed in full in the October edition under the title 'The Brilliant Exposition on "Miracles" given by "C. S. Lewis, M.A.' (It looks like a good hour's worth.)

His second visit was announced in the April 1945 edition (for April 15) and printed in the May edition as 'The Grand Miracle By C. S. Lewis'.

The 'Voice of the Laity' series was widely advertised, 'featured' (as we would say today) 'high-profile speakers', and attracted large audiences. Other speakers in the 1942 series included the Headmaster of Rugby and (rather oddly) the Archbishop of Canterbury. The American Ambassador had to cancel his appearance because of ill health. In 1945 the speaker the week before Lewis was the prominent wartime government minister Sir Stafford Cripps.
Notes: C. S. Lewis, Church, Maxwell Rennie
Newer Post Older Post Home