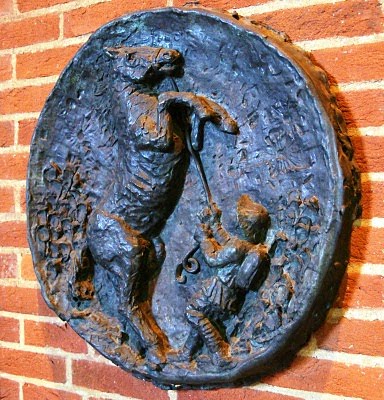 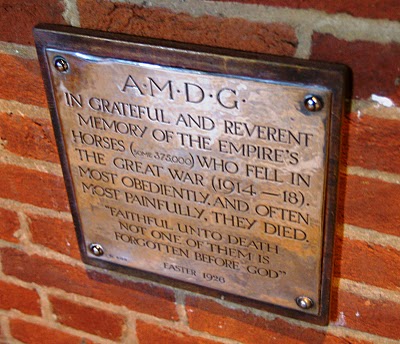 St Jude’s has what may have been the first of very few war memorials to horses.

According to the Parish Paper the idea for the memorial seems to have come from the first vicar, the Reverend Basil Bourchier who, as a forces chaplain in the Great War, had seen their suffering. 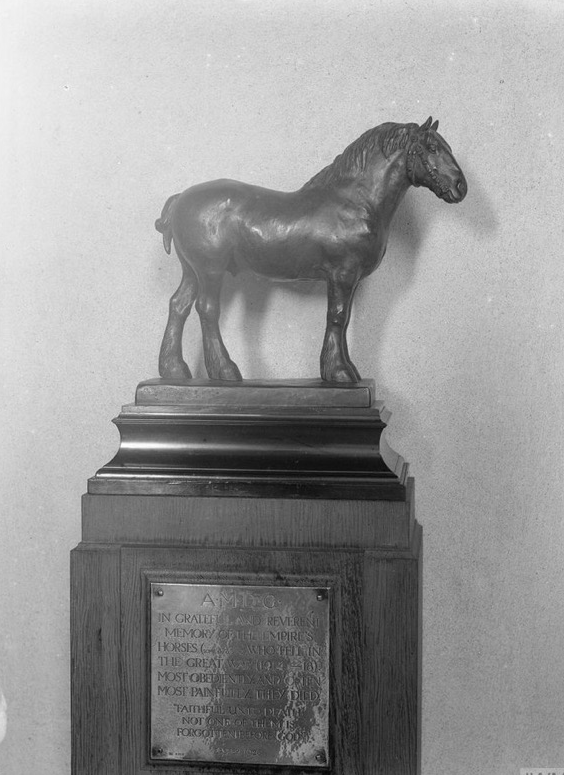 In 1926 he was offered a bronze of a war-horse moulded by Charles Lutyens (the late father of Sir Edwin Lutyens, the architect of the church) which had been exhibited at the Royal Academy. Largely, it seems, through contributions from the congregation the bronze was purchased and an accompanying plaque and wooden plinth commissioned. The memorial was unveiled on Easter Sunday (April 4) 1926 by Miss Frances Jeffcock during 'Festal Mattins' at 1130am and dedicated by the vicar. (Parish Papers 737, 739, 740).

Unfortunately the bronze itself was later stolen and so what we have today (on the wall by the main west door) is the original plaque and a new (1970) bronze relief of a war horse by Rosemary Proctor, daughter of William Maxwell Rennie, the third vicar. This old photograph shows the original horse on its plinth (designed by Edwin Lutyens) with the plaque attached. The memorial is standing to the left of the St George's altar on the north transept wall. The icon, now at the entrance to the Lady Chapel, is on the left, with the candle stand, now at the back of the church, beneath it. The painting behind the altar has not been identified. The presence of the painting commemorating Michael Rennie in the City of Benares lifeboat helps date the photograph probably to the early 1950s.