A painting by Walter Starmer in the lunette above St George's altar at St Jude’s, which represents the last few moments in the life Michael Rennie, the Vicar's son, who died of exhaustion after rescuing several evacuee children from the sinking City of Benares in 1940.

The SS City of Benares was a steam passenger ship. In 1940 it was being used as a refugee ship and was carrying 90 children from Great Britain to Canada as part of the wartime overseas evacuation. On the night of 17/18 September it was torpedoed by a German submarine and sunk in the early hours of 18 September 1940, with great loss of life. 83 of the children onboard were killed. The following is an article by one of those few children (now elderly adults) who survived.


I am one of the few children who survived the ordeal of the sinking of the City of Benares and have only just been told the story about the memorial in your church to Michael Rennie. I have also read the reports of his remarkable bravery trying to rescue many of the young children who were pitched into the sea when his lifeboat was launched into the rough seas and how he swam repeatedly to bring them back to the lifeboat before they were swept away but only for many to die later from exposure. He was a real hero.

There have been some very accurate and heart-searching books and articles written about the sinking of the City of Benares. In case some of your church members may wish to learn more about the tragedy I recommend they read the latest book called 'Miracles on the Water' by Tom Nagorski. The author visited and interviewed all of the remaining survivors and has produced this remarkable book, full of drama, but told with skill and compassion. There are full accounts of Michael Rennie.

After the War, when stories of some events were being investigated and being told for the first time, many of us surviving children of the Benares were brought together to tell our stories. It was these stories that now form to details of the books and even a documentary BBC film on the event. It also made us children realise how very lucky we are to have survived and had good lives since. We have always acknowledged this and in our research we discovered that a small church in Wembley was where so many of the children who did not survive came from. As a result of this it was agreed that we should hold our various Memorial Services at the Church of the Annunciation in South Kenton and where we all met up for a reunion. We held services for the 50th, 55th and 60th anniversaries but now our numbers are depleting due to age. There are now only very few of us left and we are now mostly over 80 but we all have a very strong bond and keep in touch with each other.
City Of Benares - Sequel

On 4 July 2009, a week or so after Mr Bech had telephoned me about the City of Benares, I was in the church doing the flowers and as the door was open, three visitors came in and started to walk around the church. When I went to talk to them I found to my delight and amazement, that one of the ladies, Christine Drury, was the niece of Michael Rennie’s fiancée, Miss Pamela Bankart. After Michael’s tragic death Miss Bankart joined the Friends Ambulance Unit in Calcutta and worked as a driver for the rest of the war. The Unit was formed by the Society of Friends and was manned by Friends, who are, of course, confirmed pacifists. The three ladies had heard about the memorial painting to Michael Rennie and the 83 children of the City of Benares and had come to look for it.

They were also amazed to hear about the recent contact with Mr Bech and City of Benares survivors and were equally impressed that the tragedy is remembered annually in St Jude’s.

Michael Delaney recommends this social history of Britain between the two wars. It is a fascinating account of the changes in society at this time. The sinking of the City of Benares is mentioned in this book as a seminal event in the reformulation of the evacuation policy.We danced all night: a social history of Britain between the wars by Martin PughI was so interested to hear that each year St. Jude's also hold prayers for Michael Rennie and for all those who perished with him as a result of the sinking of the City of Benares. It was a major event of the War and probably one of the worse single disasters concerning children. It is nice to know that memorials, like your painting, will always be a reminder to future generations of the tragedy of War.
Derek Bech (Aged 9 years old in 1940)


Published in Autumn 2009 edition of The Spire. 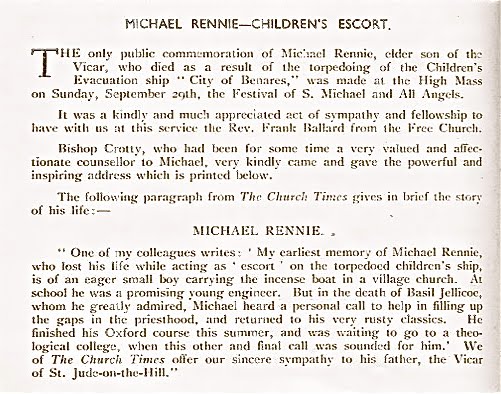 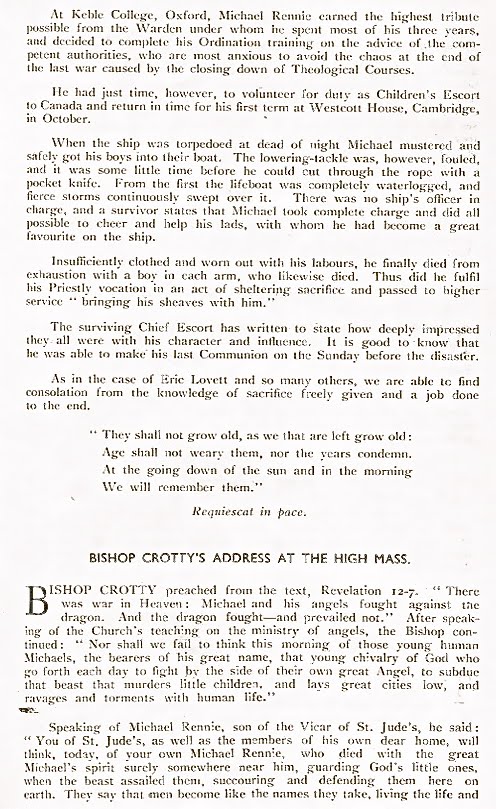 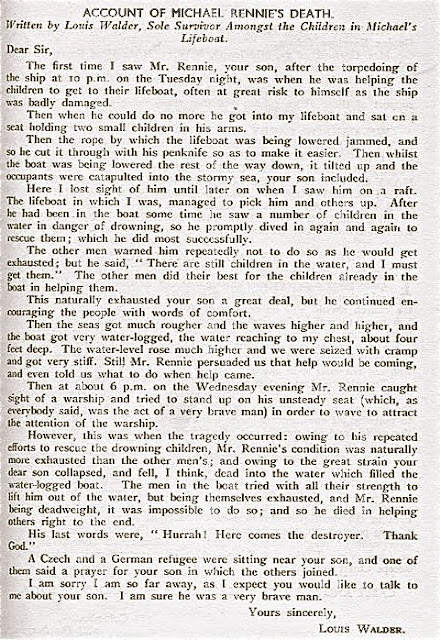