The magnificent crucifix on the east end of the church was unveiled on 12 April 1924 by the Marquess of Aberdeen and blessed by the Bishop of Southern Rhodesia. The occasion also marked the completion of Lutyens's 1909 plan for the church which had had only a 'temporary' east wall since the consecration in 1911. From 1916 until 1923 the smaller crucifix now in the 'Calvary Cupboard' in the south west porch had occupied more than one position there as a war memorial (see these copyright images). 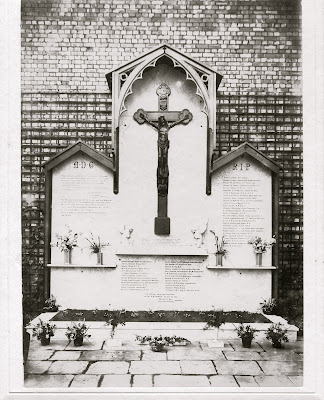 The crucifix, which appears to have formed part of Lutyen's's original scheme for the church, is in the style of Velasquez. The first vicar, Basil Bourchier, wrote "I have never seen a figure which, carved out of the solid stone, is so full of life. The veins in the Saviour' s wrists are perfectly wonderful. We owe a great debt to the sculptor, who, regardless of wind, cold and weather, has been constant to his task practically every day for nearly nine months". 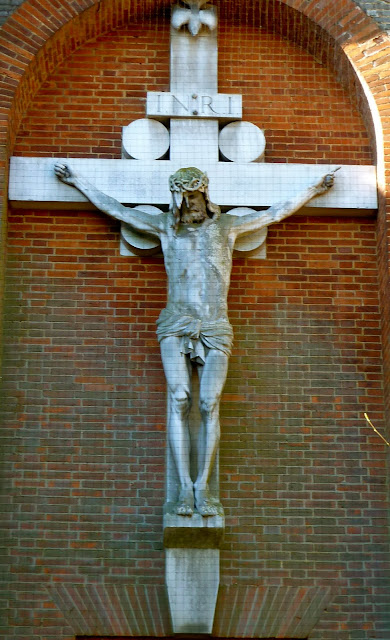 The cost was met by Miss Flora Spalding, a childhood friend of the vicar's mother, and was given in memory of her brother and sister, Harry and Louisa. Both ladies were Scottish, hence the invitation to Lord Aberdeen, quondam Governor-General of Canada and Lord Lieutenant of Ireland, whose son, Lord Dudley Gordon, was a sydesman (sic) at St Jude's.

Miss Spalding died in 1930 bequeathing £100 to St Jude's for the upkeep and preservation of the Calvary "which sum has been invested [and] the income will be used as directed. All members of St Jude's will be filled with gratitude at this act of generosity." (St Jude's Parish Paper January 1931)