A Visit to the Suburb

The London Branch of the Institute of Historic Building Conservation
visited St Jude's in May 2009 (the report has just been published). 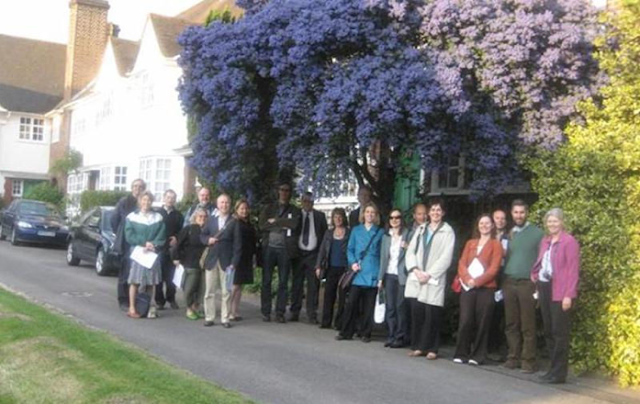 Our thanks go to David Davidson for suggesting and organising this trip for the Branch. Probably most of the 19 members and friends who came were unaware of the extent and history of the Suburb.
And what a fascinating place it turned out to be – every type of house for every grade of society, open spaces, wild woods, distant views, sympathetic street landscapes, intimate squares and greens, the Great Wall and of course, Lutyens’s Squares: South, North and Central Square – the latter containing not only Lutyens’s buildings for Henrietta Barnett School, now being extended by Hopkins Architects, but also the extraordinary St Jude’s Church which is gothic and vaguely Germanic on the outside and classical – sort of – on the inside, with a wonderful display of wall paintings of biblical scenes and worthy Christian women by Walter Starmer (1877-1961). Basil Bourchier, the first vicar of St Jude’s, commissioned Starmer having met him at Arras in 1918 when Bourchier was an army chaplain and Starmer was a war artist! Starmer is little known mainly because he spent most of his working life on this one set of murals!
We ended our tour here and were kindly greeted by the vicar, Rev. Alan Walker, who explained the church, often used for films, concerts, recordings etc. David, who is architectural advisor to the Hampstead Garden Suburb Trust, gave us an inspired talk and tour, at the gallop, around as much as he could in 2 hours!! It was all so gripping and exciting that we hardly noticed until we were able to sit down n the church!
The Suburb was looking charming, on a sunny May evening and we were able to appreciate those ideals of Henrietta Barnett who founded the Suburb in 1907 – one of which was that there should be no walls but plenty of hedges, trees and open spaces. We even walked through a wood! And, of course, the brilliant designs of Raymond Unwin and his partner, Barry Parker, the former being appointed as the Architect for the project in 1906. Interesting to note, in this egalitarian age, that Eton College who owned the land sell to Henrietta Barnett as she was a woman so she had to enlist her men friends to negotiate on her behalf!
If anyone is interested to read further, ‘Hampstead Garden Suburb – Arts and Crafts Utopia’ by Mervyn Miller, brought out to coincide with Hampstead Garden Suburb’s centenary, is recommended. The Hampstead Garden Suburb Residents Association web site - http://www.hgs.org.uk/ also provides a wealth of in-depth history and information.
Thanks again to David Davidson and Rev. Alan Walker for such an interesting trip.
Kate Ainslie Williams
Notes: Church, Lutyens, Suburb, Walter Starmer
Newer Posts Older Posts Home
Subscribe to: Posts (Atom)