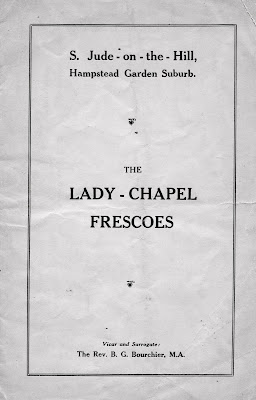 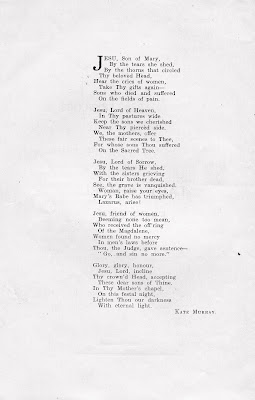 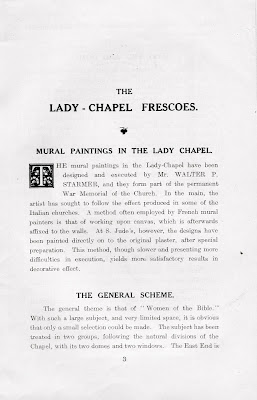 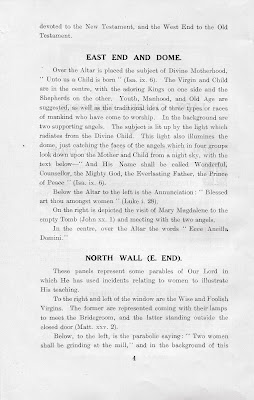 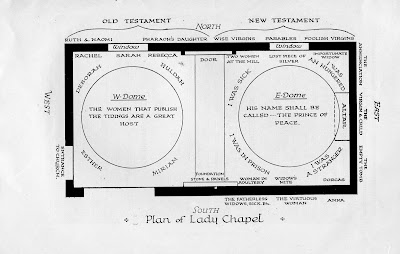 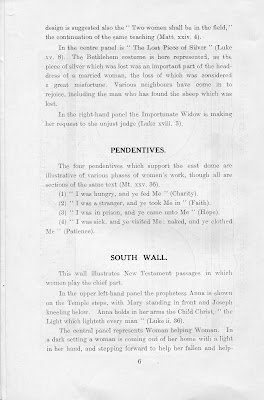 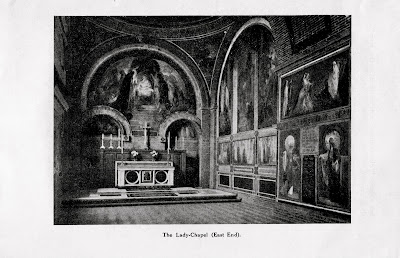 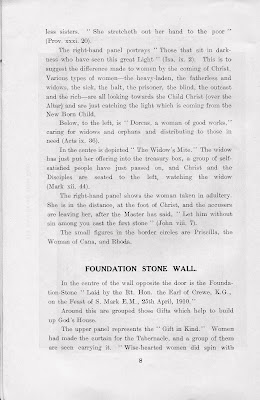 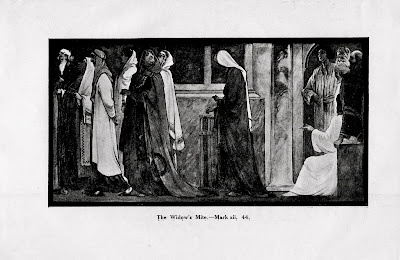 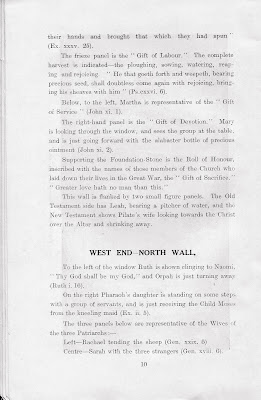 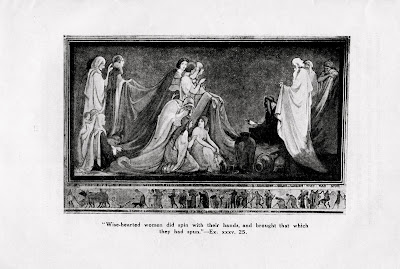 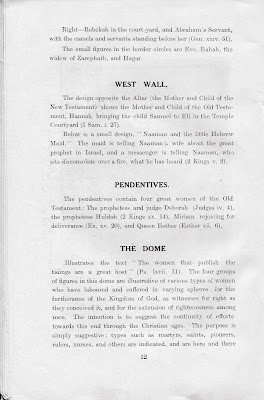 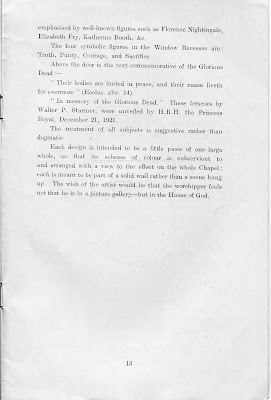 The artist wrote to the Parish Paper of Friday, February 4, 1921

Sir—In reply to your request, I have pleasure in giving you the following brief outline of the work in the Lady Chapel.

In the main it has been sought to follow the effect of the schemes used in the Italian churches. The method of mural work frequently employed by the French is to paint upon canvas, and afterwards to fix the canvas on to the walls. This is a comparatively easy method for the artist. The effect of the Italian system, which it to work on to the walls themselves, is more satisfactory from the architectural point of view, though slower and more difficult of execution. After consultation with Sir Edwin Lutyens on all important points this is the method now being employed.

The more, one sees of your beautiful church the more one admires its splendid proportions and the genius of its architect. The lunette shapes lend themselves admirably to decoration; the domes present more definite but interesting difficulties. The upper parts of the Chapel have had to be replastered on account of cracks in the original coat of plaster, caused by the natural drying and settling of the building.

I am taking as a general scheme for the Lady Chapel " The Women of the Bible." With such a subject and with strictly limited space it is obvious that only a small selection of subjects can be made, so that it is impossible to include all the favourite subjects of the worshippers.

The Chapel naturally divides itself into two sections, with Ms two domes and two windows. It is possible, therefore, to divide the subjects into two groups — New Testament in the east section and the Old Testament in the west.

Over the altar there is placed the subject of Divine Motherhood, the Virgin and Child, the adoring Kings on the one side and the Shepherds on the other. The subject is decoratively treated—-i.e., no attempt at realism is intended, as, if this were so, it would be quite impossible, for instance, to represent the Kings and the Shepherds in the same scene. Underneath this are two small subjects, the Annunciation and the Visit to the Tomb.

The north wall is devoted to the Teaching of Christ as illustrated' in parables dealing with women—the Wise and Foolish Virgins, the Woman with the Lost Piece of Silver, &c, and the opposite south wall with the Practice as illustrated by women—Dorcas, the Widow's Mite, Anna, &c.

The domes are devoted to more angelic figures, symbolical of Praise and Adoration, as being suitable to the position above the eye-level, while the four pendentives (the triangular sections supporting the domes) carry one text which I have divided into four sections ' to suggest various forms of Ministry by Women— " I was an hungered, and ye gave Me meat;" " I was a stranger, and ye took Me in;" "Naked, and ye clothed Me; sick, and ye visited Me;" " In prison, and ye came unto Me."

The subjects in the west section represent characters from the Old Testament. Amongst these may be picked out those which show four phases of life— The Girl, the Woman, the Wife, the Mother—The Little Hebrew Maid, Sarah, Hannah, &c. Larger figures supporting the dome are leaders amongst women, such as Deborah, Esther and others.

The wall opposite to the door presents some difficulty, as it has the foundation-stone in the centre. It • has therefore been divided into panels. Round these I have put various subjects to indicate some of the gifts which woman has it in her power to bestow—the Gift in Kind, the Gift of Labour, the Gift of Service, the Gift of Devotion and Sacrifice—as it is such as these that help to build the Church, and I suggest the suitability of these round the foundation-stone.

The treatment of all subjects is suggestive rather than dogmatic. No attempt is made at academic portraiture or absolute realism. Each design is intended to be a little piece of one large whole, so that its scheme of colour is subservient to and arranged with a view to the effect on the whole Chapel; each is meant to be part of a solid wall rather than a scene hung up. My wish would be that the worshipper feels—not that he is in a picture-gallery—but in the House of God. 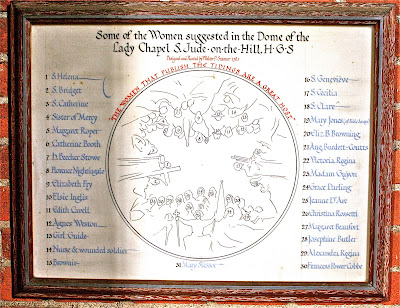