Portrait of the Reverend Basil Bourchier 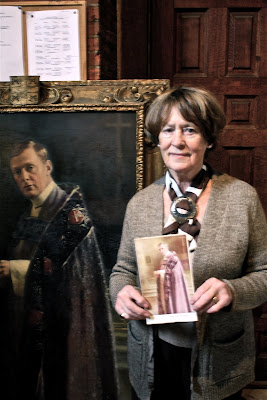 St Jude's was visited today by Rosalind Henry whose grandmother painted the large portrait of the Reverend Basil Bourchier, the first vicar of the church, which until recently hung in the south-west porch. The artist, Alice Ballard, was born in November 1871. She studied at the Slade School of Art and exhibited at the Royal Academy in 1897 and 1898. She married Dr James Stewart Mackintosh and they lived at the Corner House, Platts Lane.

Rosalind is seen above in front of the portrait and holding a contemporary signed photograph of it which she kindly allowed us to copy. 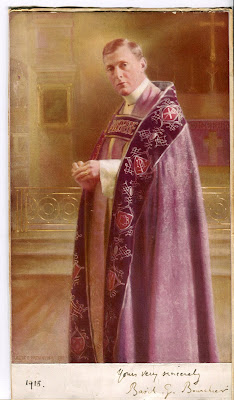 The Vicar is wearing the purple cope dedicated on Palm Sunday 1916 and still in use here during Lent and Advent. The complementary high altar frontal (dedicated March 5, 1916) is also still in use. Clearly visible to the left is the sanctuary lamp in the Lady Chapel given by Lady Battersea in 1913 in memory of Canon Samuel Barnett. The picture on the column has not yet been identified. The spot today is occupied by a plaque of the Virgin and Child. Starmer has yet to be commissioned to paint his frescoes on the walls. The reredos, candles and cross on the high altar are as illustrated in the 1923 History of S. Jude-on-the-Hill but have since been changed. The pictures show brass railings at the top of the sanctuary steps in the style of the present gates which were dedicated by Princess Louise on 16 July 1916. As it is unlikely these have been removed (the present wooden ones are shown in Karel Verschaeren's 1916 painting and in the 1923 History) it must be that the artist included planned or proposed railings which were never in fact installed. 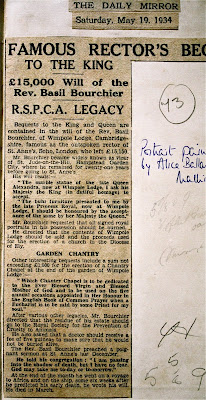 Pasted on the back of the photograph is a cutting from the Daily Mirror of Saturday May 19, 1934 recording Bourchier's will in which he made gifts to the royal family and the RSPCA. 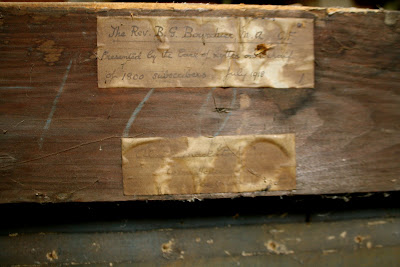 On the back of the painting itself we discovered a label saying it had been presented to Bourchier by the Earl of Lytton on behalf of 1800 subscribers in July 1918. 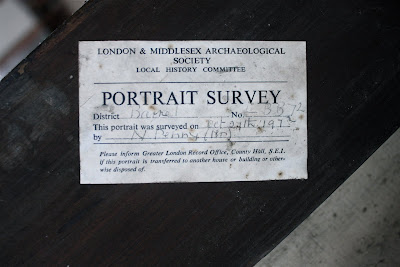 Another records the 'survey' of the portrait on behalf of the London and Middlesex Archaeological Society in 1972 by N. Penny.

This leaflet was bound into our copy of the Parish Paper of June 14, 1918 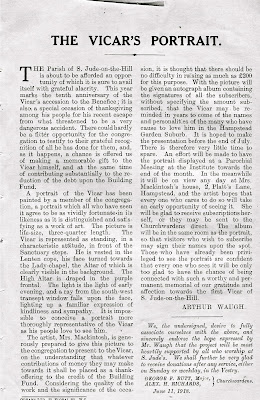 The Parish Paper of July 19, 1918 reports that the portrait was presented to the Vicar on Friday July 12 in the Institute by the Earl of Lytton. The Vicar himself wrote "I will conclude by once again assuring Mrs Stewart Mackintosh, the originator and fulfiller of the whole idea, that St Jude-on-the-Hill will ever number her among its most kind and valued benefactors. As for myself I will cherish and treasure this gift to the end of my days".

After Bourchier's death in 1934 the portrait passed into the hands of his close friend Miss F. E. Jeffcock who presented it to the church in 1948. Miss Jeffcock (who died in 1949) was also the donor of the Bourchier Memorial (West) window and the original horse memorial. 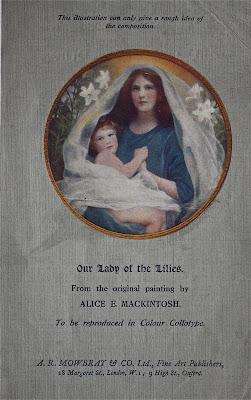 Another picture by Alice Ballard Mackintosh at one time in the possession of the church and extensively reproduced.
on Thursday, October 14, 2010