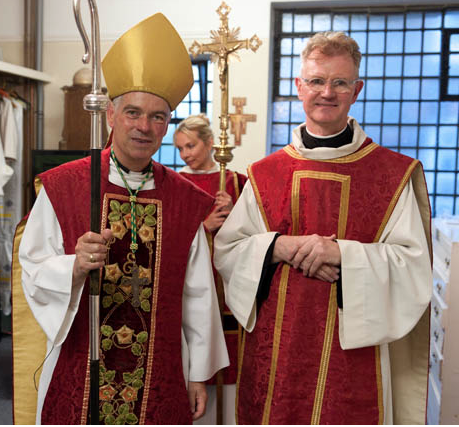 The Bishop of Edmonton told our Deanery Synod held on Thursday 17 July at Golders Green Church that he was retiring at the end of this year.

Peter Wheatley was made Bishop in March 1999.  After completing degrees at Oxford and Cambridge and his theological training at Mirfield and Ripon Hall, Oxford, he was ordained in 1973 and has spent his entire ministry in London.

He served first as Curate at All Saints, Fulham, prior to becoming Vicar of Holy Cross, St Pancras in 1978. In 1982, he moved to be Priest-in-charge of All Souls Hampstead and St Mary Kilburn and Vicar of St James, West Hampstead.   At the same time as being a parish priest, from 1988 he was Director of Post-Ordination Training for the Edmonton Area until 1995, when he became Archdeacon of Hampstead. He was also Area Dean of North Camden from 1988 to 1993 and a member of the General Synod from 1975 to 1995.
Notes: Bishop of Edmonton
Newer Post Older Post Home