Easter at the V and A

Christian Community Views on Objects in the Collection of the Victoria and Albert Museum
From April to September 2006, seven advisory groups were held with different faith community groups. The aim of these was to consult with the communities to whom the V&A collections were relevant and see what reactions the members of the advisory groups had about the items. The participants were asked to select from groups of pictures of V&A objects and prioritise which items struck them most. These could be for personal reasons or how important they were from a cultural or faith point of view, artistically or whether they still had relevance to their lives today.
Greek Ceremony of Washing Feet outside the Court of the Holy Sepulchre, Jerusalem 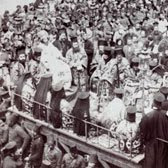 'I chose the foot washing at the Holy Sepulchre. I've been there a few times, not to the foot washing but to the Holy Sepulchre, so I know it quite well as a building. If a site can be holy in Christianity - which is a disputed question - this is probably the holiest one, being the site of Calvary and the tomb, and therefore Good Friday and the Resurrection are events associated with that. The size of the crowd has a great impact but it also raised for me the question of the future of the Christian community in the Holy Land because it is under considerable threat. I also liked the people hanging off walls (and that kind of thing) but my favourite thing is what appears to be a row of Turkish soldiers in the front. What the Turkish soldiers appear to be doing is protecting the Bishops from the junior clergy - that appeals to me particularly.' 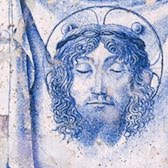 'I also chose Veronica's Veil; the colour leapt out at me. The narrative is the Way of the Cross and Veronica gives her veil or handkerchief in the old-fashioned sense to Jesus, to wipe his face of sweat and blood as he carries the cross. The image of his face is imprinted on it when it is returned to Veronica. The name Veronica, of course, means true image. I think it is very important because it is the prototype of all Christian art and justifies Christian art. Christian art needed to be justified in light of the commandment against making images but if Christ himself made the first image by giving his on Veronica's cloth then that justified it in practical terms and in theological terms.

Christian art is justified because of Christ himself as the incarnation: through his incarnation, Christ is the image of the unseen God and therefore images become a legitimate way of portraying divine matters telling of sacred stories in Christianity. So in that sense, it is the most fundamental of all Christian images. And she is seen in many churches as one of the Stations of the Cross; she is seen in my own church, so is familiar that way.'
Revd Alan Walker
Notes: Easter, Jerusalem, Veronica, Victoria and Albert Museum
Newer Post Older Post Home